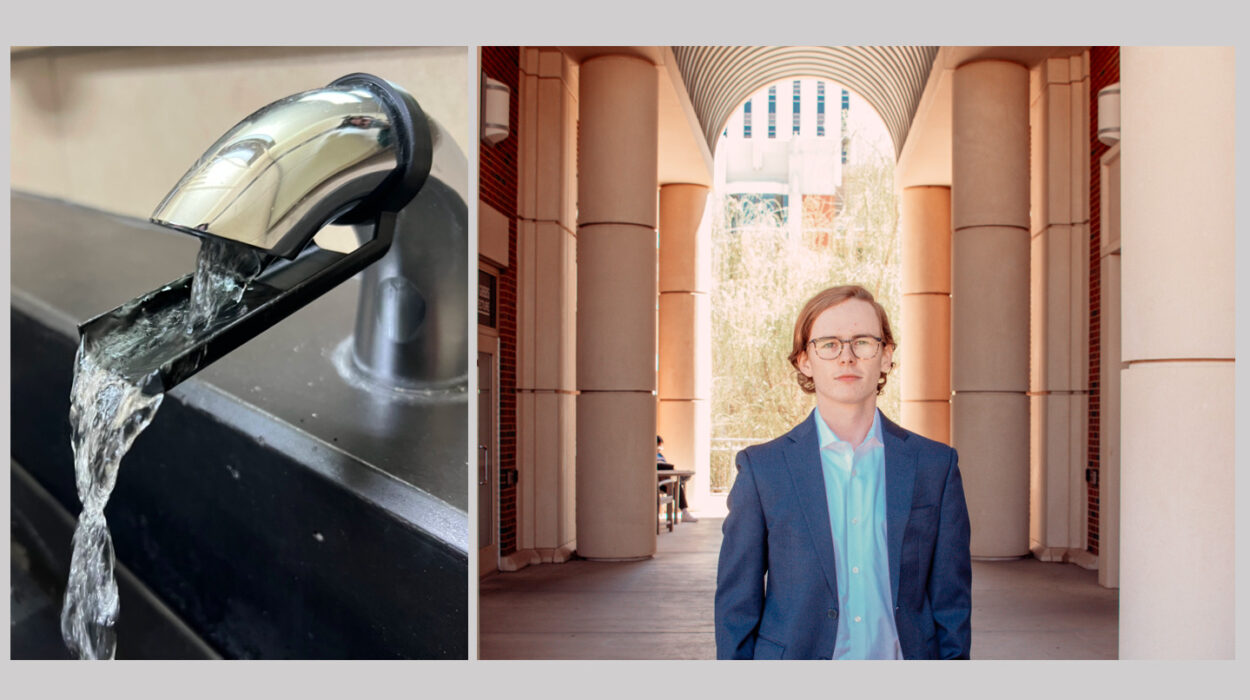 Second year Architecture student, Whit Hull, recently designed, printed, and installed attachments to the faucets in the bathrooms here in Gould Hall, the home of the Gibbs College of Architecture, to make them more usable.

Anyone who has washed their hands in Gould Hall has noticed that the existing faucets make it difficult to wash your hands. The water flow from the faucet falls very close to the back wall of the sink, and it is near impossible to rinse your hands effectively. Whit took note of this problem. When on a tour of campus buildings for his studio, he learned that the faucets were retrofitted a few years after Gould Hall was renovated when much of campus transitioned to touchless bathroom fixtures. The new touchless faucets were not suitable for the level of water pressure in Gould Hall, which resulted in poor flow and limited space between the stream of water and the back of the sink.

After the campus tour, Whit approached his studio professor Ken Marold about making attachments for the faucets to make them more usable. He said, “I mentioned to my professor [Marold] that I wanted to 3D print some little things and stick them on there. And he’s said, ‘Yeah, just do it.’ I thought there might be a bit more questions or push back, but there was just encouragement so that was nice. And I just started drawing up some ideas that I had. And he helped me out quite a bit.”

With Professor Marold’s help, Whit designed and 3D printed several prototypes, going through twelve iterations before deciding on a design. The current design only costs between ten and twelve cents to print. He then, with the help of classmates, installed them on the sinks in all of the bathrooms in Gould Hall.

Whit also shared that, “I probably wouldn’t have done this if it weren’t for the Methods I course with Dr. Person and Dean Butzer. We were supposed to look around campus and find a problem and come up with a solution for it. This [the faucet attachments] wasn’t one of the ones for my project. But I think that that was a very useful way of looking at things and assessing your surroundings.”