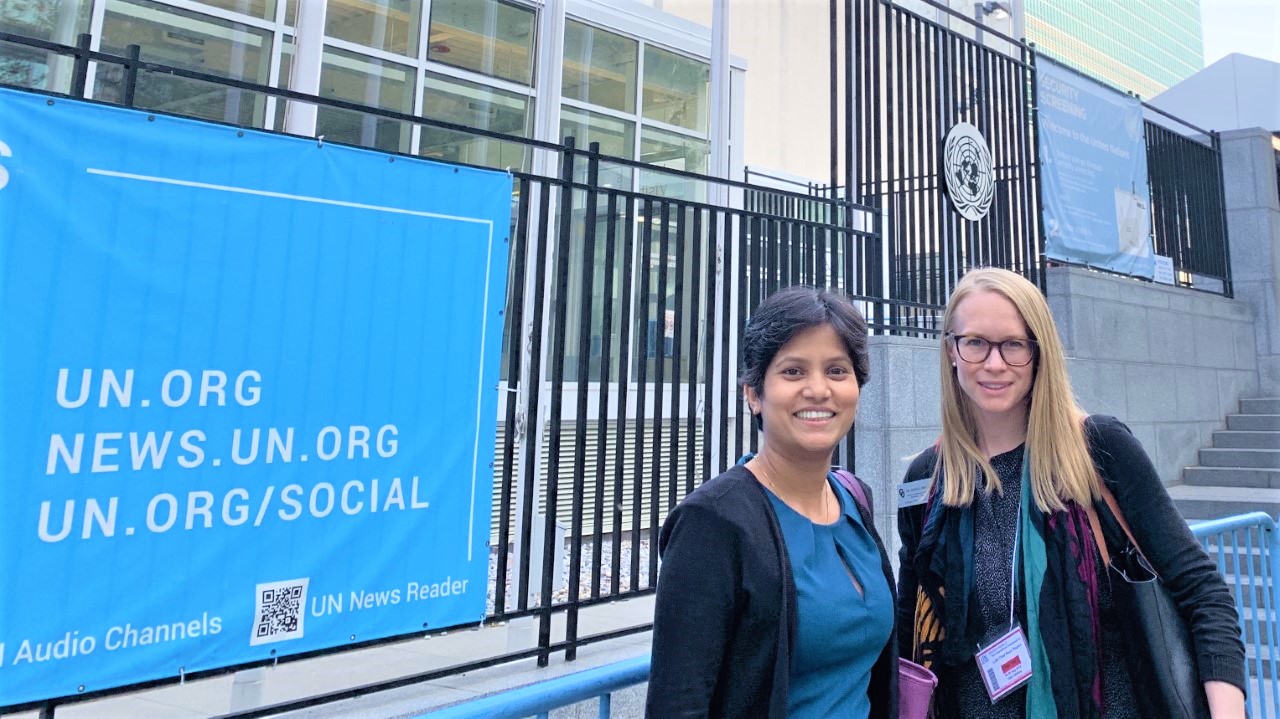 Gibbs College of Architecture faculty recently attended a two-day sustainability conference at the United Nations (UN) focused on the Lake Chad Basin Region. The conference was dedicated to bringing together UN and non-state actors to explore new means of cooperation as they work to implement the UN’s Sustainable Development Goals (SDGs).

Since the 1960s, Lake Chad has shrunk by 90 percent. This shrinkage is largely due to irrigation practices, population growth and climate change. Its original basin overlaps the African states of Nigeria, Niger, Chad and Cameroon. Due to its shrinking size, today Lake Chad’s water–once an important source of water for over 20 million people in all four of those states–only remains in Chad and Cameroon.

Previously, Lake Chad provided the freshwater necessary to support agriculture, fishing and livestock in the area. Today, without this water source, over 10 million people are struggling to survive due to the lake’s dwindling water levels. Their lives are further complicated by the presence of the armed opposition group Boko Haram. All told, it’s one of the most critical humanitarian crises in the world, yet few people know about it.

It sought to bring together diverse stakeholders to share information about methods, emerging research and resources available to alleviate some of the environmental and humanitarian stresses of the Lake Chad Basin Region. University of Oklahoma (OU) Outreach served as co-organizers of the conference, led by Dr. Belinda Biscoe, Interim Senior Associate Vice President of the University of Oklahoma.

“How can the UN deliver in a knowledge and data-based way?”

Dr. Suchi Bhattacharjee, associate professor of interior design, and Dr. Angela Person, director of research and strategic planning for the Gibbs College of Architecture (GCA), were invited to attend the conference because GCA has an emphasis on supporting the UN’s SDGs through its research, teaching and community engagement efforts.

Ambassador Abdou Abarry, Permanent Representative of the Niger Republic to the UN

During the conference, they heard from representatives to the UN from Nigeria, Cameroon, Chad and Niger, as well as expert peacekeepers and others, including leadership from the UN Office for the Coordination of Humanitarian Affairs and UN International Children’s Emergency Fund (UNICEF), and the UN High Commissioner for Refugees.

“There are no quick-fix responses. There are short-, medium- and long-term plans.”

Through a series of panel discussions, it was revealed that many people in the Lake Chad Basin Region have never had access to school or healthcare, and the humanitarian camps that have been set up in the area are providing access to these resources for the first time.

The building of educational and health infrastructure, as well as securing and sustaining the rights of women and girls are among the most critical needs in the region. In addition, as so many people are living in refugee or internally displaced persons (IDP) camps, it is critical for aid organizations to work toward maintaining a civilian, rather than militarized, character in these camps.

A common thread throughout the conference was the idea that outsiders can provide support and resources, but, at the end of the day, it must be the local people who drive decision-making and lead change.

Amelia Hays, the regional program officer for the International Rescue Committee (IRC), said that the IRC is working in the Lake Chad Basin Region to build the capacity for local people to be change agents in their own communities.

Among the IRC’s approaches are training water management committees, offering a “Girls Shine” curriculum to empower girls, and providing “Dignity Kits.” These kits commonly include basic health supplies for women and girls, such as sanitary napkins, soap, underwear, a comb and toothbrush.

“We are building capacity for people to be change agents in their own communities.”

Lukas Ruttinger, senior program manager of Adelphi, a Berlin-based think tank that tackles climate diplomacy among other issues, shared their recent study of climate fragility risks in the Lake Chad Basin Region. Adelphi identified several key risks in the areas of development, sustainability, and security. They also found that social cohesion is very important when it comes to reducing risks, in particular for keeping young people seeking camaraderie from joining armed groups like Boko Haram.

During a panel about connecting local action with global resources, Martin Wainstein, innovator-in-residence at the Tsai Center for Innovative Thinking at Yale University, recommended “radical collaboration and inclusive access to technology,” such as digital currency, as one route forward.

In particular, this panel looked at ways in which investors like Ant Financial Services, an affiliate of the Chinese Alibaba Group, can mobilize resources to support the region. For example, one panelist asked whether the “Ant Forest” model of game-ifying climate action could be used to bring in outside capital.

In another session, entitled “Capacity Building for Effective Multi-Stakeholder Partnerships,” two OU researchers, Dr. Kim Klockow-McClain and Dr. Yang Hong, shared their work in realms of risk perception and communication and hydrology, respectively. This panel discussion offered possible methods and lessons that could be applied to the Lake Chad Region related to communicating climate risks, training local hydrologists, and more.

We take a population focus: Get on the ground. … You have to get on the ground to know how people are receiving [the message], understanding it, and what their capacities are for responding to it.

The experience hearing first-hand from state, UN and NGO leaders about the Lake Chad Basin enriched Dr. Bhattacharjee and Dr. Person’s perspectives on complex global issues. Together, they left the conference with a stronger understanding of not only the Lake Chad crisis, but also the importance of educating students who can work collaboratively toward a future in which all communities are designed for resiliency.