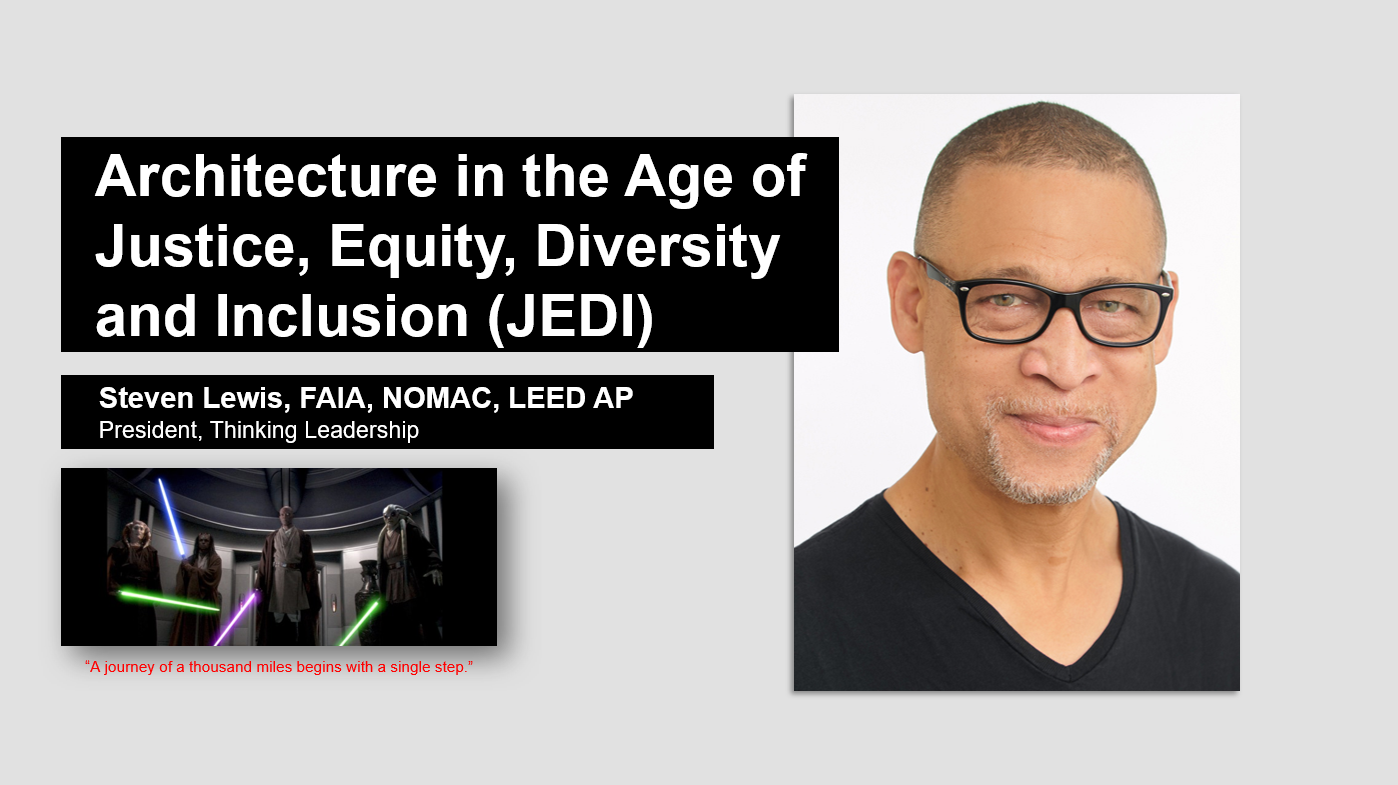 The University of Oklahoma Christopher C. Gibbs College of Architecture is pleased to host R. Steven Lewis, FAIA, NOMAC, LEED AP, during the Spring 2021 semester to lecture and participate in a design studio. During his visit, he will offer an online lecture entitled “Architecture in the Age of the Justice, Equity, Diversity and Inclusion (JEDI).” The lecture will be held via Zoom on Wednesday, April 7th, 2021, from 4:30 p.m. – 6:30 p.m.

While Lewis is at OU, he will participate in a graduate-level studio slated to design an affordable, intergenerational, mixed-use housing project in downtown Norman. He will also participate in discussions with the Gibbs College NOMAS Chapter to help them focus on the future and explore how the chapter may move forward in participating more effectively in future NOMAS Design Competitions.

Steven Lewis is an architect and a tireless advocate for social justice and diversity within the field of architecture. He recently left his position as Urban Design Practice Leader in the Los Angeles office of ZGF Architects, LLP in order to refocus on his consulting practice, Thinking Leadership. Prior to ZGF, Lewis served as Urban Design Director for the Central Region of Detroit in the City’s Planning & Development Department. During his tenure in Detroit, he played an integral role in building a strong multidisciplinary team of diverse professionals, all working together to bring about the most equitable and inclusive urban recovery in history.

Steven was also a Professor in Practice at the University of Michigan’s Taubman College of Architecture and Urban Planning, where he created and taught a seminar course titled, “Designing With Community,” and co-taught a design studio based on an actual project by the Michigan Department of Transportation to repair the damage done to what was once the epicenter of Black culture and commerce up until it fell victim to a freeway built under the urban renewal policies of the late 1950s and early ’60s.

In addition to his excellence across the built environment, Steven demonstrates a commitment to equity in the profession that infuses every part of his professional life. He was a Loeb Fellow at the Harvard Graduate School of Design for the 2006-07 academic year, where he focused on the issue of race within the profession of architecture. In December of 2010, Steven concluded a two-year term as President of the National Organization of Minority Architects, traveling around the U.S. and several other countries advocating for architects-of-color.

Steven was the 2016 recipient of the AIA’s esteemed Whitney M. Young, Jr. Service Award, and was elevated to the AIA’s College of Fellows. He holds a Bachelor of Architecture from the Syracuse University School of Architecture.

This event is made possible by the Bruce Goff Chair of Creative Architecture endowment. Please contact David L. Boeck with questions about the events (dlb@ou.edu).