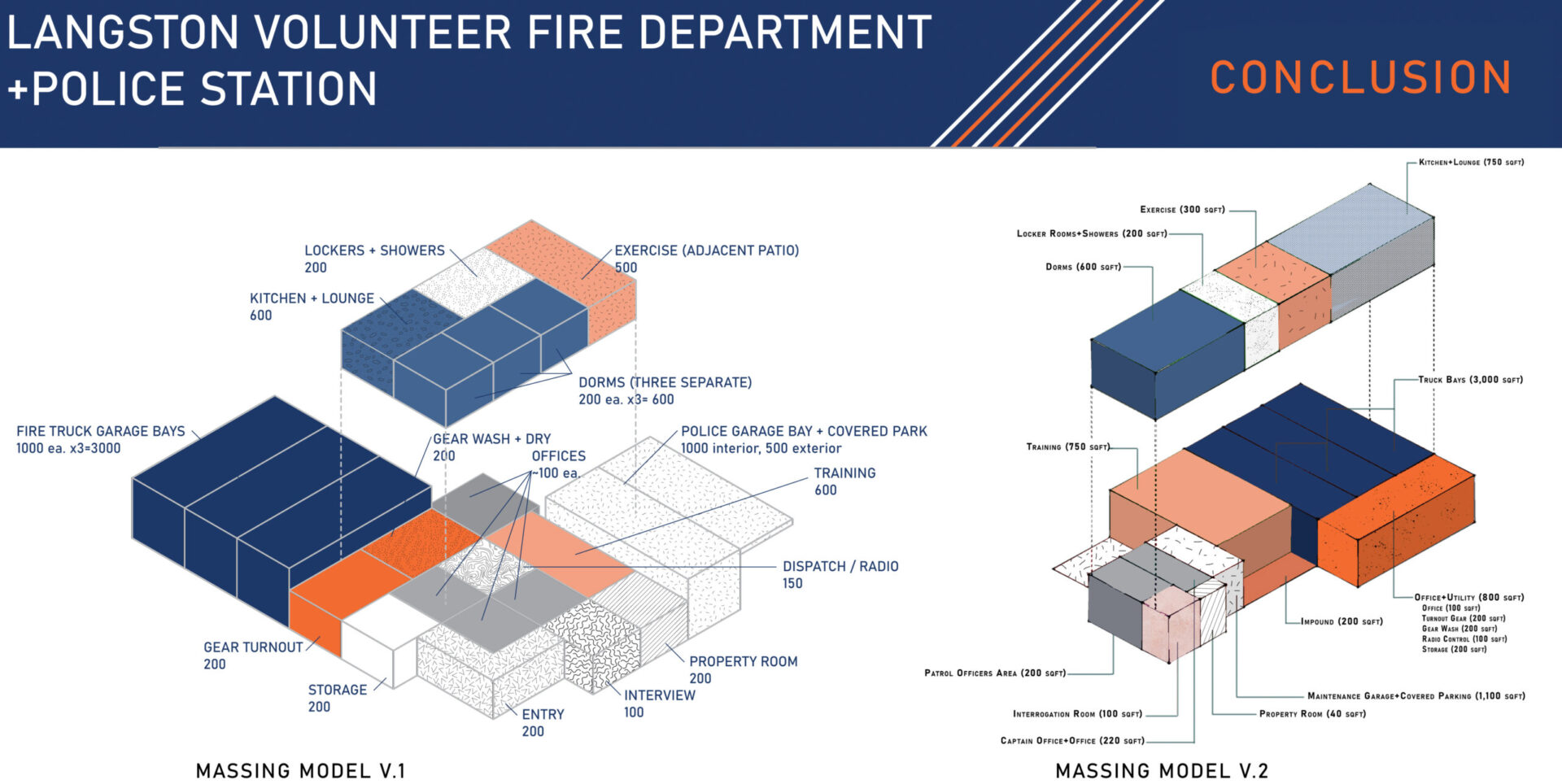 OU Institute for Quality Communities (IQC) interns Kayarash Karami and James Nemeth developed conceptual layouts for a combined police and fire public safety center in response to the City of Langston’s proposal for a new building. Nemeth is a fifth-year architecture student, and Karami is a fourth-year architecture student working on his accelerate master’s degree. Professional mentors René Peralta and Sam Callahan helped guide the IQC Langston community intern team with this project.

Langston, Oklahoma, the home of Langston University, is a small town located in Logan County. To initiate this project, the interns interviewed Langston Mayor Sheila D. Stevenson and representatives of the departments to develop an understanding of the city’s needs for their joint police and fire safety center.

Nemeth and Karami began their project with a preliminary space planning report to help decide the location of the new combined police and fire station. One of their main concerns during project development was the building’s location and proximity to the surrounding community. It was important that the station should be in an area where it can effectively serve the entire town and better facilitate community interaction. The interns provided two different options for the layout of the safety center. Both of their conceptual plans focused on shared facilities to save space in the building and to integrate interactions between the police and fire departments. Their project served as a conversation starter for the city of Langston to move towards a community focused design.

“I’m hoping that the City of Langston is going to follow up with this more community focused design and distance itself from the conventional and traditional way of having a fire department or police department in the city as we know it now and kind of build a foundation for a better human experience in their future developments,” said Karami.

As a result of this project, the interns not only learned that fire and police stations can be used as community service centers, but they also got to experience collaboration in a real-world setting. Their project will hopefully aid the City of Langston in the next phase of their development of the building to allow their station to perform better and benefit the entire community.

“It was fun to collaborate with our professors and my student partner in a real-world setting. Preparing our presentation for someone else, instead of doing it like a school project just for ourselves, was neat because it gives us more precedent and purpose for what we were delivering,” said Nemeth.