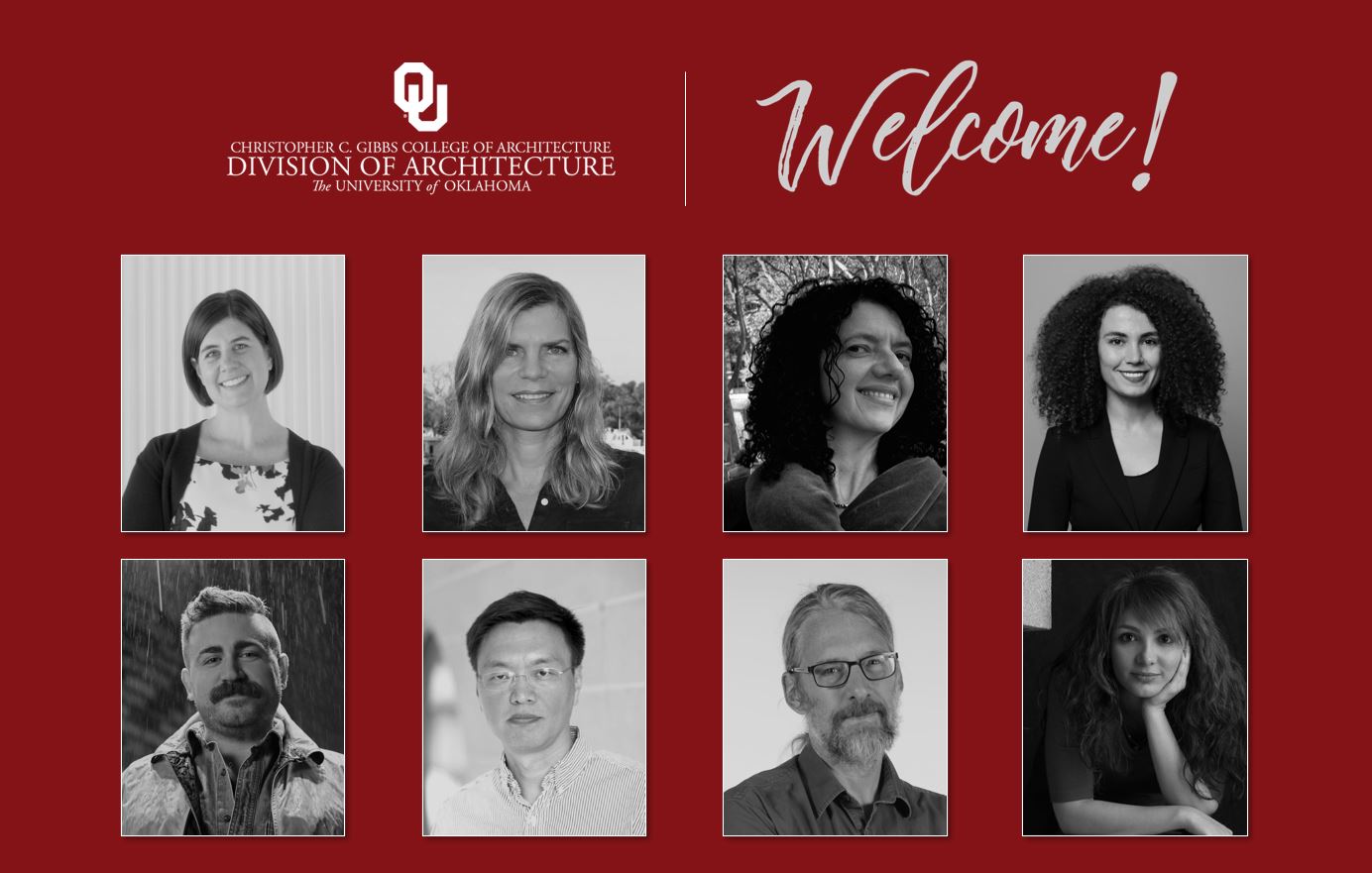 The University of Oklahoma Christopher C. Gibbs College of Architecture is pleased to announce the appointment of eight new faculty in its Division of Architecture for the Fall 2021 term. These faculty appointments, including three new tenure-track faculty members and three teaching fellows, were made following highly competitive national searches. In addition, a lecturer and postdoctoral researcher are joining the Architecture faculty.

Director of Architecture Stephanie Pilat said, “Our students will benefit from the decades of experience around the world, energy, enthusiasm and depth of expertise these new faculty bring to our program.”

Gibbs College is grateful to the many search committee members and others around campus who made this process a success!

Read on for a list of new Architecture faculty, as well as short bios for each.

Amy Wynne Leveno is an architect and a principal at OFFICIAL. Founded in 2012 with Mark Leveno, OFFICIAL is an architecture, interiors, and furniture design studio. The firm has earned numerous design awards, has been featured on the AIA Dallas Tour of Homes, and has been published nationally and internationally. The studio works on projects of all types including large and small residential, multi-family, retail, restaurants, office interiors, warehouses, and adaptive reuse as well as designing custom furniture and lighting. Amy earned a Master of Architecture from the University of Texas at Austin as well as undergraduate degrees in Architecture and Civil Engineering from Lehigh University. She is a licensed architect and LEED Accredited Professional that has worked in multiple cities across the United States.

Wanda Katja Liebermann is an architectural and urban historian and licensed architect who practiced for many years in the San Francisco Bay Area. Liebermann’s research focuses on theories and practices of architecture and urbanism in relationship to social justice movements in the United States. Her work investigates disability and racial politics, examining the recursive dynamics between identity and belonging, the built environment, and environmental design. Her research has been supported by the National Science Foundation, Harvard Joint Center for Housing Studies, the Arnold J. Brunner Grant, a Graham Foundation Grant, among others. Her current project is a book manuscript for Routledge, called Architecture’s Problem with Disability. She received a Doctor of Design from Harvard University and a Master of Architecture and Bachelor of Arts in Architecture from UC Berkeley.

Tamar Zinguer is an architect, architectural historian and educator whose overall project is concerned with the pedagogy of design through history and across scales. She locates architecture and its discourse within a broader field of cultural studies, art history, history of technology, literature and sociology. Tamar’s book, Architecture in Play: Intimations of Modernism in Architectural Toys (University of Virginia Press, 2015), shows how for nearly two hundred years playthings have reflected changing attitudes towards form, structure, and permanence, echoing modernist experiments while also incorporating technological advances in their systems of construction. She received her Ph.D. in History and Theory of Architecture from Princeton University, M.Sc. in Architecture from Technion-Israel Institute of Technology, and B.Arch. from The Cooper Union.

These fellowships pay tribute to the contributions of OU alumni Robert L. Wesley, Herb Greene, and Violeta Autumn; their years at OU during the American School period were formative ones in which they grew as designers. Through these fellowship opportunities, we aspire to provide the same fertile conditions for growth and development to today’s emerging designers and scholars. Each fellow will join OU for a two-year term, during which they will teach three courses per academic year, as well as develop a creative project or research agenda to be shared with the OU community through a public lecture or exhibition.

Esin Pektas is the inaugural Robert L. Wesley Teaching Fellow. She is a dual-licensed New York State Professional Engineer and Registered Architect, and an immigrant from Eastern Turkey. Esin has over 17 years of experience in architecture, engineering, urban planning, and construction administration in New York City, where she focuses on skyscrapers and adaptive renovations specific to the city’s unique historical and environmental context. She has worked on an assortment of commercial, residential, and institutional properties. She holds a B.Arch from Yildiz Technical University in Istanbul, Turkey. She also studied Civil/Structural Engineering at City University of New York at CCNY and earned a Masonry Restoration certification from the Restore Program at Columbia University of New York.

Marco Piscitelli will join the OU Architecture and Interior Design programs at OU as the second-ever Herb Greene Teaching Fellow. His design experience ranges in scale from urban planning to furniture design. Piscitelli asks how a playful, research-based practice can operate as an alternative to market-based, client-driven methods of creating. Most recently, his research project “Ultra-Clean: Architectures of Contamination Control” probed the history of mechanical air control and its manifestation in the middle-third of the Twentieth Century within the industrial cleanroom and the operating room. He holds an MS in Critical, Curatorial, and Conceptual Practices in Architecture from Columbia University’s Graduate School of Architecture, Planning and Preservation and Bachelor of Architecture from Syracuse University.

Xiaobo Quan is a researcher, educator, and designer who specializes in evidence-based design of health and healthcare environments, with more than twenty-five years of experience in both academy and industry. Dr. Quan leads multidisciplinary collaborative efforts in using rigorous empirical research methods to examine the impact of the built environment on human behaviors and health outcomes, evaluating design innovations, and creating tools and other resources for applying research-based knowledge in design optimization. He holds a Ph.D. in Architecture and a Certificate in Health Systems & Design from Texas A&M University, as well as Master’s and a Bachelor’s degrees in Architecture from Southeast University in Nanjing, China.

Chris Morrey was born on the Canadian plains and has lived across the Midwest and intermountain west from Alberta to Texas. He is a sculptor with a 30-year practice building works for public and private commissions as well as for gallery exhibition, with production methods ranging from hand craft, to bronze and steel fabrication, to computer-aided design and production. Chris’ public sculptures include commissions for the city of Tucson, Arizona and Columbia, Missouri; the Columbia Regional Airport; and university campuses in Oklahoma and Missouri including the University of Missouri in Columbia. His teaching focuses on leading students to understand the active role they take in perceiving, interpreting, and creating the world around them. Chris earned an MFA in Sculpture from the University of Missouri and a BFA in Sculpture from the Kansas City Art Institute.

Shooka Motamedi is an architect, educator and architectural design researcher who uses behavioral neuroscience to explore the liminal boundaries of architecture in museums. Dr. Motamedi’s recent work investigated how interstitial spaces in museums affect mutual communication between people and places. At the University of Oklahoma, Dr. Motamedi is extending this research on people’s perceptions of liminality and alterity in museum spaces to understand how they affect social and emotional interactions. She completed her Ph.D. studies at the University of Tehran in 2021. She earned her Master of Architecture degree from Islamic Azad University, where she taught design studios and architectural theory from 2011 to 2018. She also holds a Bachelor of Science in Architecture and a Bachelor of Arts in English literature.