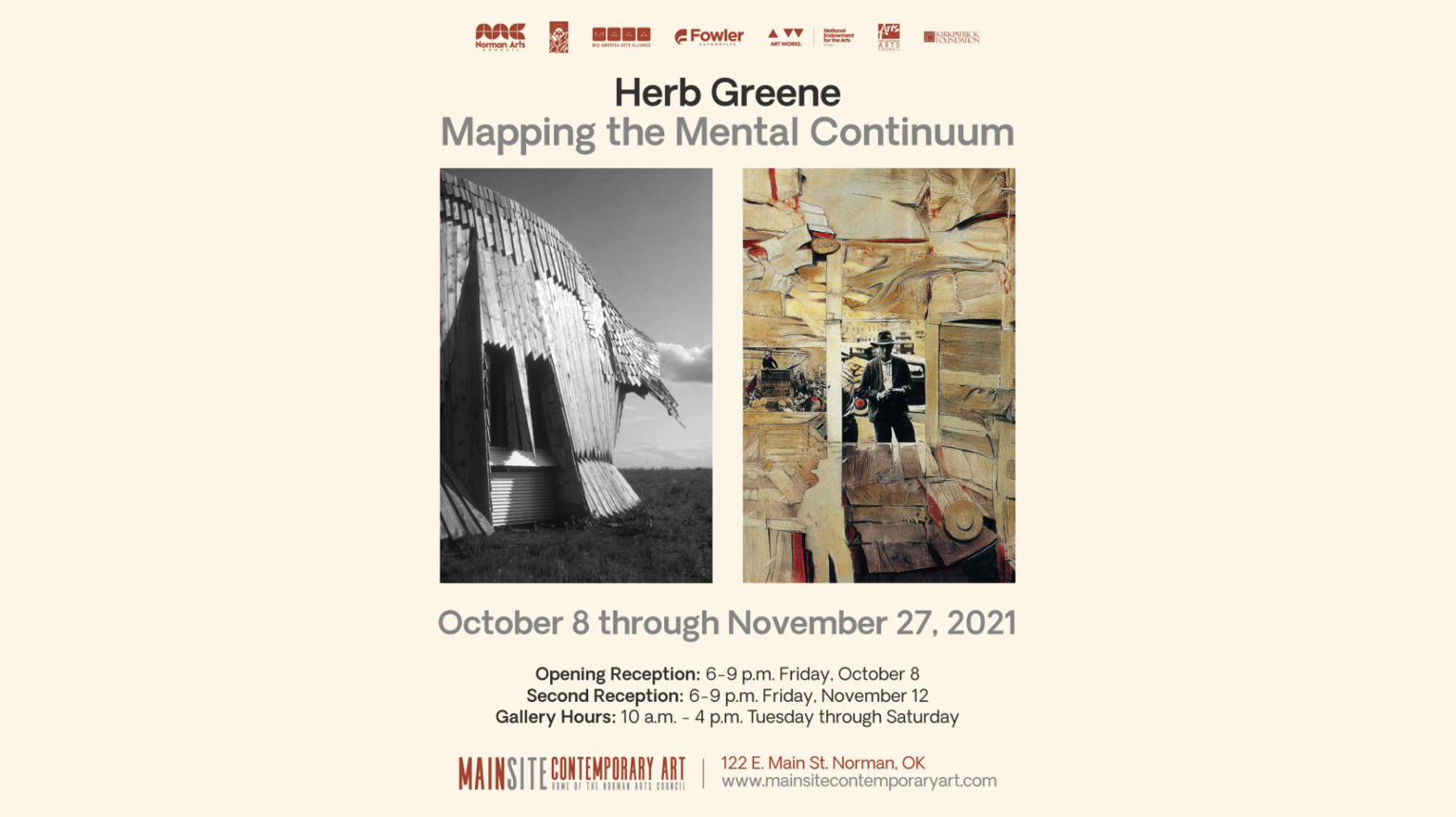 Collage paintings and architectural drawings by Herb Greene will be exhibited alongside historic photographs of his built projects located in Oklahoma.

Norman, OK – MAINSITE Contemporary Art is honored to host an exhibition of works by architect and visual artist Herb Greene. The event marks the first solo exhibition of Greene’s work in Norman, where he studied architecture under Bruce Goff at the University of Oklahoma in the 1950s and built the iconic Prairie House in 1962.

A catalog of the exhibition, which includes an in-depth interview with Greene in addition to essays and striking images, will be available for purchase at the November reception and preorder in October. A short film is being produced to further document the exhibition, featuring Greene among his artworks and beloved architectural projects across Oklahoma.

A percentage of proceeds from artwork sales will be donated towards a feature length independent documentary film in the making, Remembering the Future with Herb Greene, due for preview screening in Fall of 2022.

Mapping the Mental Continuum surveys Herb Greene’s use of ‘collage thinking’ as a theoretical and aesthetic expression of Organic philosophy. The importance of collage to Greene’s art and architecture manifests itself in the varied and simultaneous perspectives existing within a single image.

Greene’s architectural structures and painting compositions map the mental continuum as a topological space in which thinking, feeling and perception are a unified progression of events. The cognitive process emerges and converges in a world of relation that suggests an overlap of entities in space-time and a widening multiplicity of perceptual vantage points.

The artworks in the exhibit highlight a timeline that spans paintings from 1964- 1984, with content that bridges pivotal moments in American history, including three different wars, The Great Depression era and social justice movements. The documentary photographs embedded in the collage paintings, dialogue throughout the exhibition space with three of Greene’s most notable built projects: the Joyce Residence (Snyder, OK, 1959), Prairie House (Norman, OK, 1961) and the Cunningham Residence (Oklahoma City, OK, 1962).

‘Collage thinking’ is Greene’s term for interpreting the world through an integrative perceptual lens as opposed to a bifurcated reality that divides subject/object, figure/ground, interior/exterior, mind/matter and time/space.

Exhibits at MAINSITE Contemporary Art — including Mapping the Mental Continuum — are made possible by support from Norman Arts Council sponsors, including The City of Norman, Mid-America Arts Alliance, Oklahoma Arts Council, National Endowment for the Arts, Fowler Automotive, Oklahoma Department of Commerce and the Kirkpatrick Foundation.

Herb Greene studied architecture under the direction of Bruce Goff (1904–1982), one of the nation’s most original architects and influential architectural educators. Following the retirement of Goff in 1957, Greene taught architecture at the University of Oklahoma for six years, furthering Goff’s legacy and developing his own unique pedagogy.

In 1961, Greene designed and built the Prairie House in Norman, Oklahoma. The idiosyncratic and innovative architecture of Greene’s Prairie House caused an international sensation and was published in Life and Look magazines, Progressive Architecture (St. Martin’s Press), and numerous journals throughout Europe and Japan.

After his retirement from teaching in 1982, Greene moved to Berkeley, California where he continued to write, paint, and promote his concept for building with artists. In 1981, Greene published the book Building to Last: Architecture as Ongoing Art (Architectural Book Publishing, 1981), which incorporates the work of artists and crafts people into built environments and advocates for regional and cultural identity in architectural forms.

Questions regarding Herb Greene and Mapping the Mental Continuum may be directed to Joshua Boydston at joshb@normanarts.org.