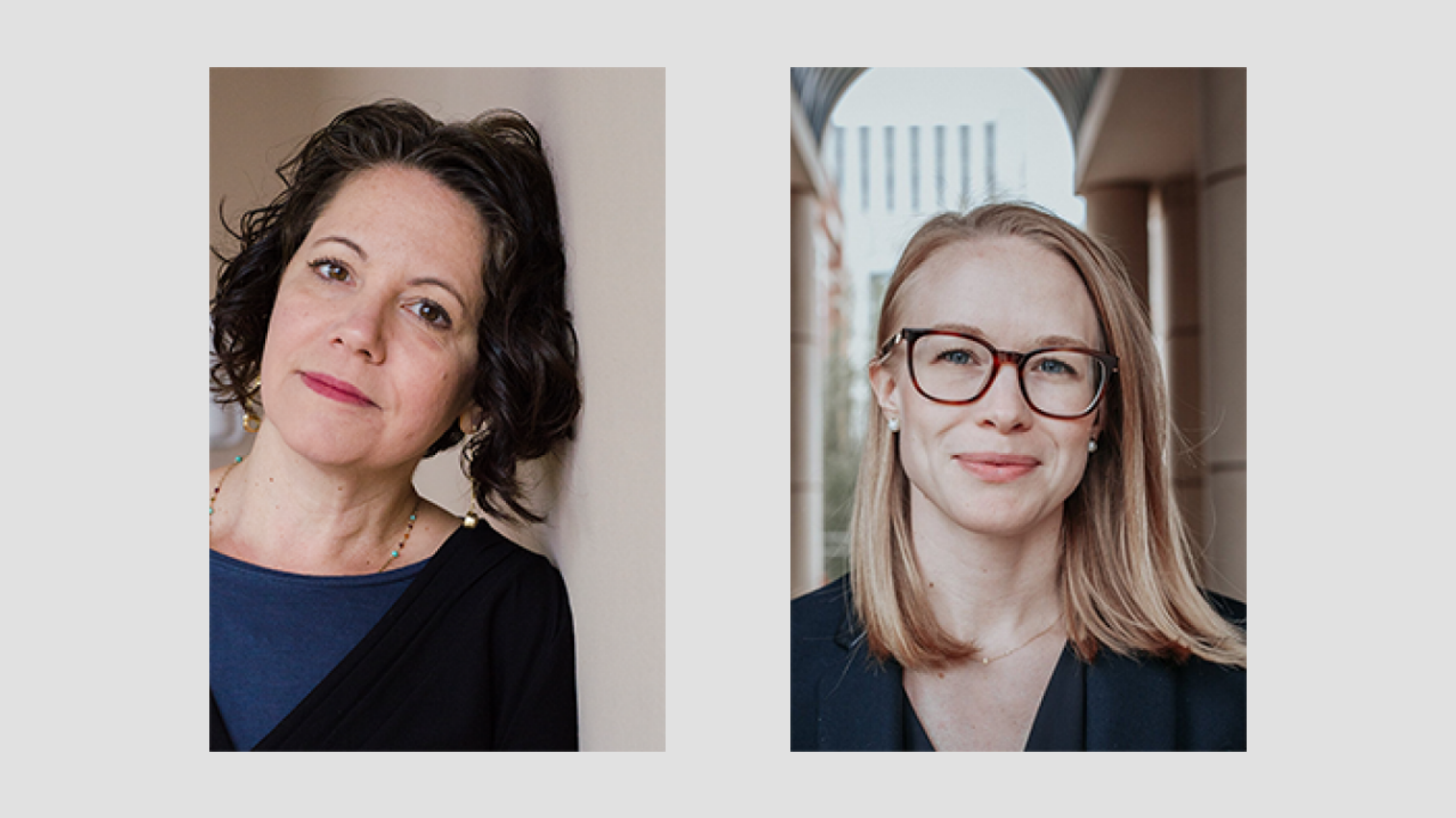 Gibbs College faculty members Dr. Stephanie Pilat (pictured, left) and Dr. Angela Person (pictured, right) were recently awarded the University of Oklahoma Vice President for Research and Partnerships Award for Excellence in Research, Design, and Creative Expression in the Humanities and the Fine Arts for their work leading the American School Project team.

“A new school, probably the only indigenous one in the United States” is how architect Donald MacDonald described the school of design that developed at the University of Oklahoma (OU) in the 1950s and ‘60s. Under the leadership of renegade architects, including Bruce Goff (1904-82), Herb Greene (b. 1929), and E. Fay Jones (1921-2004), OU developed a design curriculum that stood in stark contrast to the prevailing Bauhaus model of architectural education.

Where OU educators focused on individual creativity and discovery, architectural educators elsewhere in the U.S. encouraged their students to practice wrote copying of boxy, modernist buildings. Through this program at OU, later referred to as “The American School,” students were taught to look to sources beyond the accepted canon of Western architecture and to find inspiration in everyday objects, the natural landscape, and non-Western cultures, such as the designs of Indigenous people.

Prospective students saw this work in popular publications, including Life Magazine, and flocked to OU from around the U.S. and abroad—coming from places like New York, Hawaii, Japan, Greece, and Peru. One famous result of this student-centered approach to teaching is seen in New York-native Herb Greene’s “Prairie House,” built in Norman by OU students in the early 1960s (shown above). And yet, despite operating at the leading edge of human-centered, resourceful design, the influence of the American School at OU has largely been excluded from contemporary architectural histories.

Since 2017, Pilat and Person have co-led the American School Project, a multi-year project to uncover the hidden history of the American School period at OU, to understand its influence on architecture in the U.S. and abroad, and to disseminate and celebrate its inspiring story. By bringing together over 150 students, faculty, staff and alumni in support of this project through the development of an archive, scholarly articles, a peer-reviewed book, conference presentations, major exhibitions, international press, and more, they have ensured that the American School’s impact is no longer hidden.

The project was nominated for the award by Dr. Carmina Sanchez-del-Valle, professor of Architecture at Hampton University. Reflecting on the project, Sanchez said, “To a professor and scholar, it is the Renegades project’s documentation of the curriculum developed at OU and the consequent work of the students that offers the greatest opportunity for discovery and reflection.”

“In total, the Renegades project was designed as a resource for architectural pedagogy well into the future.” Sanchez continued, “The creativity evident in the work – including its compilation and presentation through innovative use of web-based technology – mandates recognition as a vanguard accomplishment. The team even turned the impedance of a pandemic to advantage: their use of digital technology makes easy access to their work.”

The award is conferred upon tenured or tenure-track OU faculty members whose career long and/or recent work offers a transformative new direction in humanistic or creative development. Innovative research projects for this award may be oriented toward analyses of the past, present, and future that have the potential to transform a field of study and/or to offer new directions in community-engaged research. Eligible projects must fall within the disciplines of the humanities, arts, and new media.

Stephanie Z. Pilat is a designer and architectural historian whose teaching and research examines points of intersection between politics and architecture.

Pilat is the author of Reconstructing Italy: The Ina-Casa Neighborhoods of the Postwar Era, which won the 2015 Helen and Howard R. Marraro Prize for the best work on Italian history by the Society for Italian Historical Studies. She recently co-edited The Routledge Companion Guide to Fascist Italian Architecture and Urbanism: Reception and Legacy with Kay Bea Jones, an architecture professor at The Ohio State University.

Angela M. Person joined the Christopher C. Gibbs College of Architecture in 2016, where her research and teaching have focused on architectural history and behavioral and emotional influences of built and natural environments.

Before joining OU, she was a Doctoral Fellow at the Smithsonian Institution, where she was first author of The Care and Keeping of Cultural Facilities (Rowman & Littlefield, 2014). She is co-editor of two additional scholarly books, Renegades: Bruce Goff and the American School of Architecture (2020) and Affective Architectures: More-than-Representational Geographies of Heritage (Routledge, 2021).

Since 2017, Person has co-led the American School Project with Stephanie Pilat, director of the Division of Architecture. This project preserves and documents the school of design and practice that developed under the guidance of Bruce Goff, Herb Greene, and others at the University of Oklahoma in the 1950s and ’60s. As part of this project, Person recently led the creation of an online interactive version of a major American School exhibition when the physical exhibition was shuttered early due to COVID-19.

Person is also part of a team that received National Endowment for the Arts funding to create an online interactive database of significant American School work. With Randy Peppler, a senior research scientist with the Cooperative Institute for Mesoscale Meteorological Studies, she advises the award-winning Environmental Sustainability Working Group, which provides mentored research experiences to undergraduate students.

She also advises the award-winning Gibbs College student journal, Telesis. Recently, Person organized a national conference, “Schools of Thought,” which brought together more than 100 design educators from over 50 institutions around the United States and beyond to explore the future of design teaching.