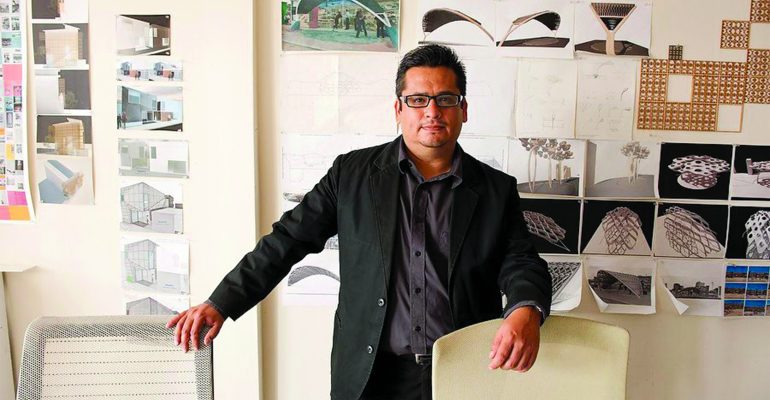 University of Oklahoma Division of Architecture Herb Greene Teaching Fellow Rene Peralta has spent more than a decade researching the United States-Mexico border, with a focus on the architectural and spatial aspects. His research looks at globalization and its impacts on urban contexts; specifically urban development, industry, socio-economics and the socio-cultural relationships.

For Peralta, “Studying the U.S.-Mexico border has always included partnering with artists, anthropologists, geographers, planners, writers, etc. to include a more multidisciplinary viewpoint.”

Through this research, Peralta became aware of Dr. Ivan Peshkov, of Adam Mickiewicz University in Poznań, Poland. Peshkov researches the economics of the Chinese, Russian and Mongolian border triangle.

Peralta and Peshkov met in 2015 at the 46th Annual Conference of the Urban Affairs Association in San Diego, Calif. After this conference, Peralta invited Peshkov to experience the Tijuana-San Diego border region first-hand.

“After his visit, we discussed a variety of similarities between both border regions and agreed to work on a joint project that would take advantage of our cross-disciplinary views,” Peralta said. “We are both interested in the topic of the borders as a particular place in the world where new urban and economical paradigms are being introduced.”

Today, Peralta and Peshkov are carrying out a comparative analysis of the socio-economic and urban contexts of the San Diego-Tijuana and Shenzhen-Hong Kong border regions.

Peralta and Peshkov are adapting their project to due to the COVID-19 pandemic. Peralta notes that these normally cohesive border regions are being split due to differing federal government responses to COVID-19 on either side of the border. Despite this split, Peralta said that, “they have also shown that their response to the crisis is nonetheless a singular way of operating due to shared socio-cultural and economic ties.”

Through his work, Peralta and Peshkov endeavor to understand the cities they research intimately. For example, they will interview a diverse range of locals in each region.

Additionally, they plan to collect digital video, photography, and drone footage, as well as sound recordings, to document the life of these two border regions. By analyzing these assets, as well as their interview data, Peralta and Peshkov hope to identify meaningful similarities and differences between the San Diego-Tijuana and Shenzhen-Hong Kong border regions.

“We hope to see how the urban forms of these cross-border regions have developed to discover if there are certain patterns that they share,” Peralta said. For example, “A similarity might be present due to the flow of migrants who bring their specific needs and desires to both sides of the border.”

While the project is largely speculative, Peralta hopes it will help inform future questions and understandings of urban borders in the 21st century.