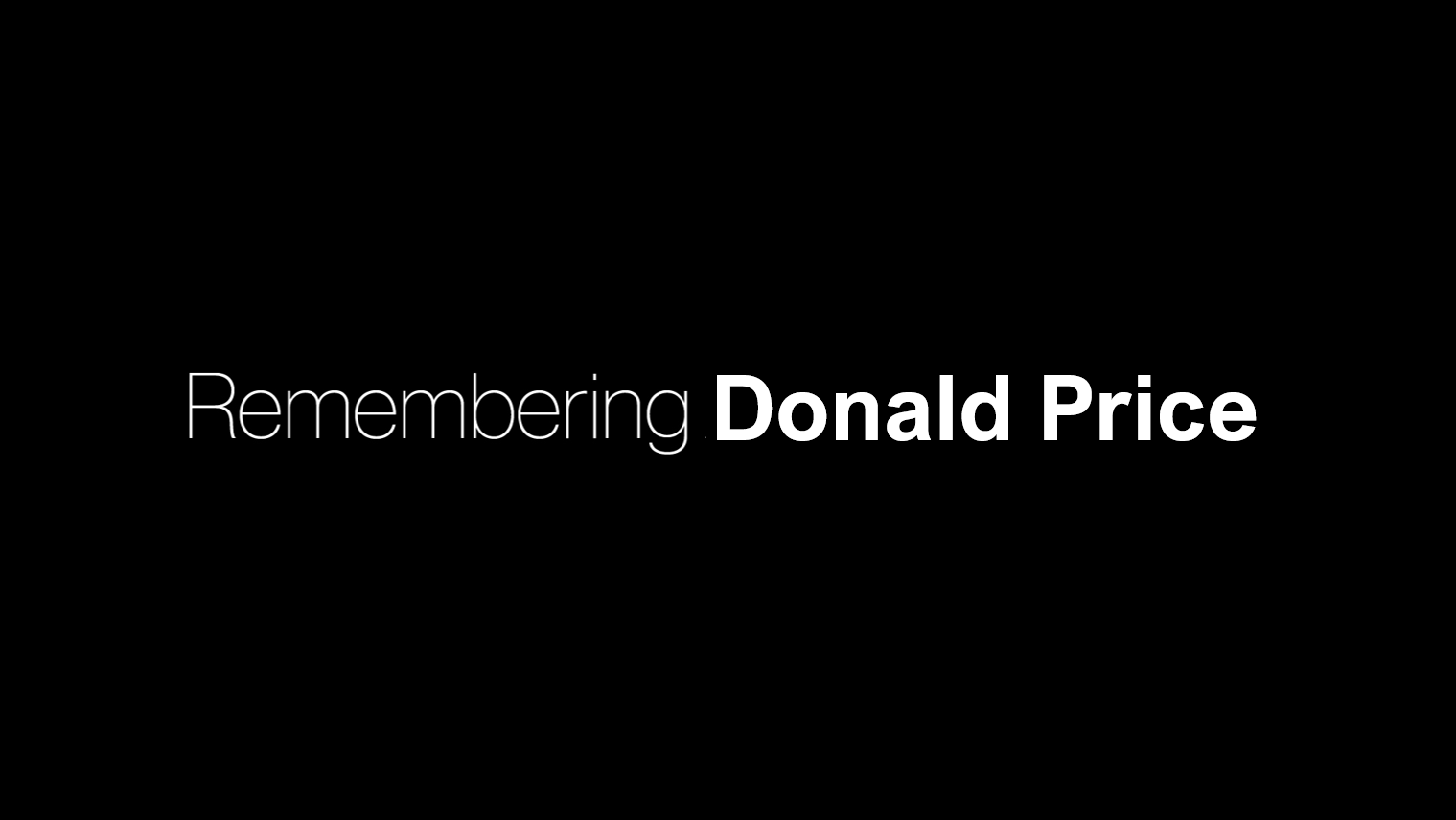 Donald Morris Price was born on February 3, 1932, in Donna, Texas, and died at age 88 on April 3, 2020, in Shawnee, Oklahoma. Don was the youngest of three boys born to Allen and Vernetta Price, who moved their young family from Shawnee to south Texas to escape the hardships of the Dust Bowl era in Oklahoma. The family returned to Shawnee when Don was five, and he began his grade school education there. He attended junior high in Midwest City when his family relocated there during World War II but returned to Shawnee and completed high school there in 1950.

Don enrolled at the University of Oklahoma to study architecture during the Bruce Goff/Herb Greene era of organic design. He also became a member of the Beta Theta Pi fraternity during this period. His studies had to be delayed when the Korean War intervened; he enlisted in the Air Force and was assigned to serve as a draftsman at McChord Air Force Base in Tacoma, Washington. He married Patricia Ann Raymer in 1953, and they moved to Tacoma for Don’s four years of service. Following Don’s honorable discharge, the young family returned to Oklahoma. Don resumed his studies at OU, completing his Bachelor of Architecture degree in 1963. Don worked for the Oklahoma City firm of Noftsger and Lawrence as a draftsman while completing his degree, and when he became licensed to practice architecture in 1964, he was named an associate partner in the firm.

During his years at Noftsger and Lawrence, he designed the plans for McArthur High School in Lawton and several projects at the University of Central Oklahoma in Edmond, including a dormitory, the library, and the student center. He was also involved in the design of the original Doctors Clinic for Baptist Hospital in OKC. In 1970, he decided to establish a firm of his own back in Shawnee; the following year, his friend and fellow architect G F Reaves joined him there and the firm became Price and Reaves Architects. Following Reaves’ death in 1984, the firm continued under the name of The Price Group Architects and Planners.

Don launched what turned out to be an outstanding architectural career that lasted 56 years (for though he narrowed his work to a few special clients’ projects in his final years, he never retired). His work can be seen in beautiful buildings across Oklahoma, including banks in Kingston, Purcell, Midwest City, and Tecumseh. He designed the Tecumseh City Hall and, at Seminole State College, residential housing for students and the Enoch Kelly Haney Center. His impact on the city of Shawnee was significant, with projects including Shawnee Public Library; the First United Bank, First National Bank, and Bank of Mid America buildings; additions to the Allen Bradley, Mobil Chemical, and Central Plastics plants; the SSM Health Cancer Center at St. Anthony’s Hospital; a series of academic buildings for Gordon Cooper Technology Center; student apartments and the Mabee Learning Center at Oklahoma Baptist University; the Veterans Memorial in Woodland Veterans Park; and over a span of 40 years, numerous buildings and additions for Shawnee Milling Company.

Don’s creative vision and commitment to ethical standards of practice were recognized by his peers. He was elected president of the Oklahoma State Chapter of the American Institute of Architects in 1981 and served on the Board of Governors of Licensed Architects from 1976 through 1980.

Don loved building things. As a teenager he built control line model airplanes from scratch and flew them in competitions on the regional and national levels. As an adult visiting the building sites of his architectural jobs, it was not unusual for him to come home with scrap materials that had been destined for the construction dumpster, which he would use to create art / fine furniture pieces for his home.

His interest in remodeling and repurposing sparked his involvement in restoring vintage Triumph cars, and he and Patsy had great fun socializing in the Oklahoma City Triumph Owners Car Club for years.

Don also loved horses and “the cowboy way.” In high school, he and his friends would travel to rodeos to compete in bronc riding competitions. Later in life, he built a home in the country so he could keep horses of his own. He enjoyed following the careers of friends who were Western artists, and in the 1980s he and friends Bill Harris and Bob Maynard frequently traveled to west Texas to participate in old style cattle roundups on the Four Sixes Ranch. They loved to ride horseback together around Shawnee Lake, and they met up with friends for high adventure pack trips from Dick Ray’s Ranch in Chama, New Mexico, into the Colorado Rockies. These were memorable experiences that never failed to make him laugh when he recounted them. Don was also a part of a group of local enthusiasts involved in bringing the International Finals Youth Rodeo to Shawnee, and he enjoyed designing the expansion of the Grand Arena Venue and supporting facilities for that continuing event.

In addition to his professional activities, Don worked throughout his life for the betterment of his community. He was a longstanding deacon at First Baptist Church of Shawnee, serving many years on the church finance committee. Don also served on the board of the Shawnee chapter of the Salvation Army, and rose to the position of past president during his years of service on the board of the Shawnee Area Council of Camp Fire, Inc. He was a member of the Rotary Club of Shawnee for many years and always looked forward to their weekly lunch meetings.

Dearest to Don’s heart was his family. His marriage to Patsy lasted 63 happy years until her death in 2016. His love for his children, Paula and Dane, expanded through the years to include their spouses, children, and grandchildren, and family gatherings were always times of laughter and love.

Don was preceded in death by his parents, Allen and Vernetta Price; his wife, Patsy Price; and his grandson, Geoffrey Price Tanner. He is survived by his son, Phillip Dane Price and his wife, Jennifer, of Shawnee; his daughter, Paula Price Tanner, and her husband, Bill, of Belton, Texas; his grandchildren J. Tanner (and his wife, Carol), Jessica Tanner Boette (and her husband, Chris), and Margaret Claire Price; and three great grandchildren (Noel Tanner, Theodora Tanner, and Oscar Boette).

In lieu of flowers, the family asks that friends and colleagues remember Don’s commitment to helping others through gifts to Saints Urgent Response Fund (https://givetosaints.com/covid19) or Direct Relief (https://www.directrelief.org/emergency/coronavirus-outbreak/), organizations that are working to provide protective equipment for first response healthcare providers.

Because the coronavirus pandemic has altered life for all, a memorial service will be held at a later date.