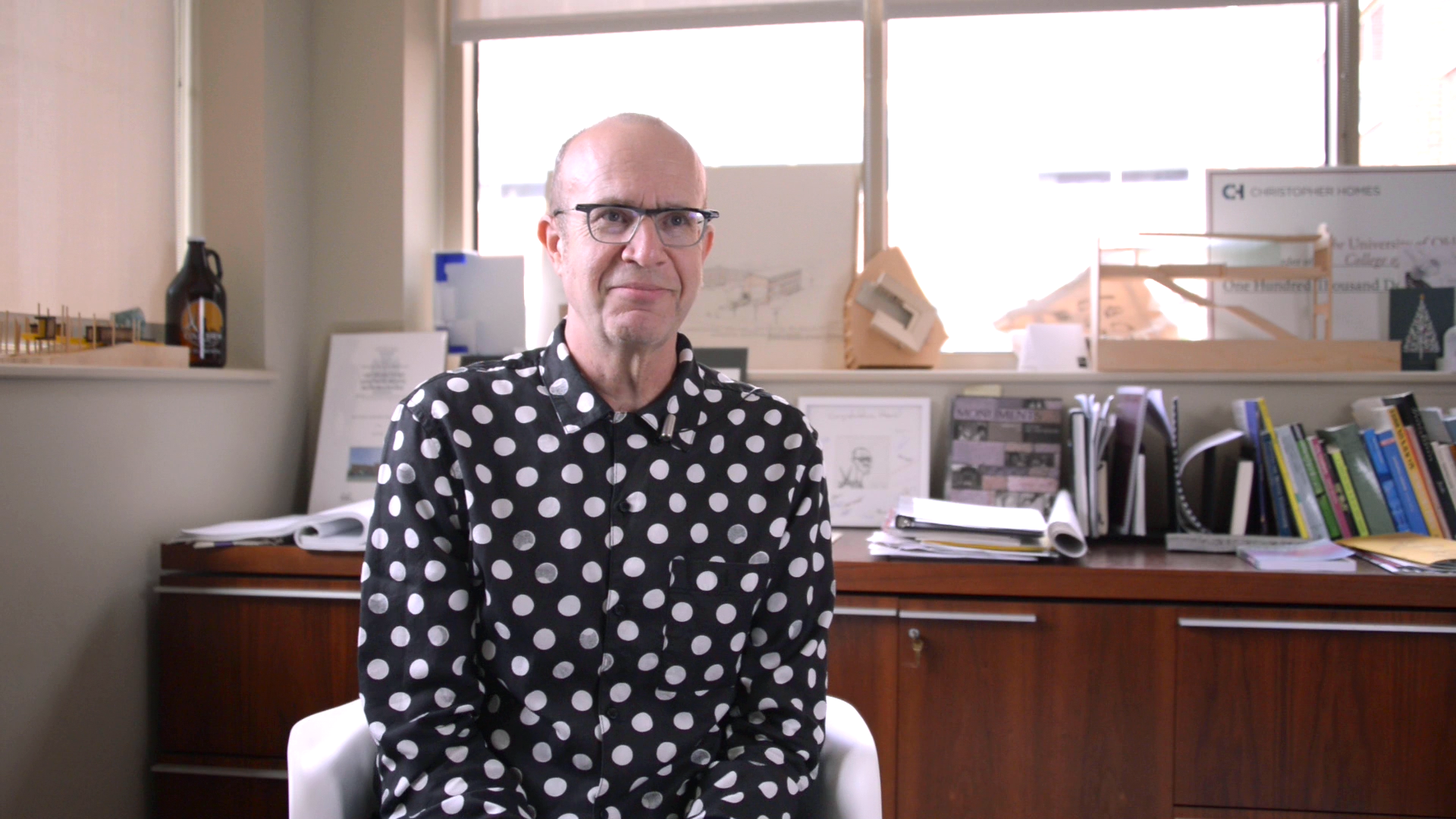 Michael Hoffner, lead designer of the Renegades exhibit and Gibbs College of Architecture professor, worked for almost a year on Renegades. The exhibit finally opened on January 23, 2020, and will be available for viewing through April 5 at the Fred Jones Jr. Museum of Art. The exhibition showcases The American School of Architecture and is the culmination of the work of many faculty, staff, students, and others from across OU’s campus. By featuring selections from the American School Archive, as well as virtual tours of several residences designed by Bruce Goff, the exhibit tells the story of an exciting period in architectural history.

GCA communications intern Kathryn (K) sat down with Michael (MH) to find out more about his role as lead designer of the project, what his favorite parts of the exhibit are, the challenges he has faced designing the exhibit and more. Read on for highlights from their conversation.

K: Can you tell me a little about yourself?

MH: I’m Michael Hoffner and I was on faculty at OU for about 3 years, so I’ve had the pleasure of working with students here and seeing their amazing level of energy and creativity. It’s been fascinating to get that creative boost in the latter part of my life, which will help my career going forward.

K: What was your role in the Renegades project?

MH: I am exhibit designer for the Renegades project, so the duties include working with the preparators at the Fred Jones Jr. Museum of Art, the curator, Luca Guido, and others. I’m the person who takes all the information and puts it together so it can be experienced as an exhibit. It’s a lot like an architectural interiors project, where we’re working with an existing space and suggesting ways that people might flow through that space. There’s a lot of signage involved – students are helping with design development and interfacing with the sign makers, so they are getting a fairly low-stakes experience of what it takes to get things fabricated to your specifications. The design team has done the layout of the show and we’ve scheduled all the pieces, so now we’re putting it into a form that the fabricators, preparators and printers can turn into tangible items for the exhibit.

K: What were the biggest challenges with this exhibit?

MH: One of the biggest challenges in designing the furnishings for this exhibit was to make the works feel at home, while not replicating or overpowering them. There are a lot of things in the show that are very organic, fluid, and expressive, so finding the right balance when designing the fixtures and armatures that hold the works was an interesting part of the design challenge. It’s been a real pleasure to work on this project, and I think we found a good balance of a respectful setting for the works and an engaging path of discovery through the contents of exhibit.

K: What sets Renegades apart from other design exhibitions?

MH: The thing that sets Renegades apart from other design exhibitions is that it is not just about design; it’s about the unique pedagogy that emerged from the University of Oklahoma in the 1940s and ‘50s. The American School was a new way of teaching that Bruce Goff brought to the Department of Architecture in 1947. It influenced the way students were taught and the work they completed. The American School is about much more than design.

K: What is your favorite part of the American School of Architecture?

MH: What I love about the American School is that it really is about being American; it’s about having that sense of individuality, creativity, and innovative and entrepreneurial spirit, and the faculty reinforced that. They helped the students find their voices and didn’t try to make them into miniature versions of themselves. Ultimately, they encouraged individuality and the American-ness of each student.

K: What do you think is the most exciting part of the Renegades project?

MH: There are multiple things that are really exciting about the show. It’s an opportunity for people to understand the groundbreaking things that were happening at OU during the American School era, when Goff was chair of the department. For many, it will be their introduction to key people of the school, including some lesser known people who were doing amazing things. This doesn’t just apply to faculty; it includes students who went on to have interesting careers after their education at OU. And finally,  Renegades communicates that the American School is not necessarily a style or flavor of design, but a way of thinking, approaching a project, and teaching students. It was a groundbreaking approach to the way students’ creativity was drawn out. It wasn’t a style that was forced upon them; it was a way to understand each person’s potential and innate creativity. The instructors worked with each student to inspire individual creativity, making it very different from what was going on at other schools during the time.

Thank you again to Michael Hoffner for taking the time to talk with us about his experience with the Renegades exhibition. On behalf of GCA, we look forward to seeing what you will accomplish next!

Editor’s note: This interview has been edited and condensed for clarity.