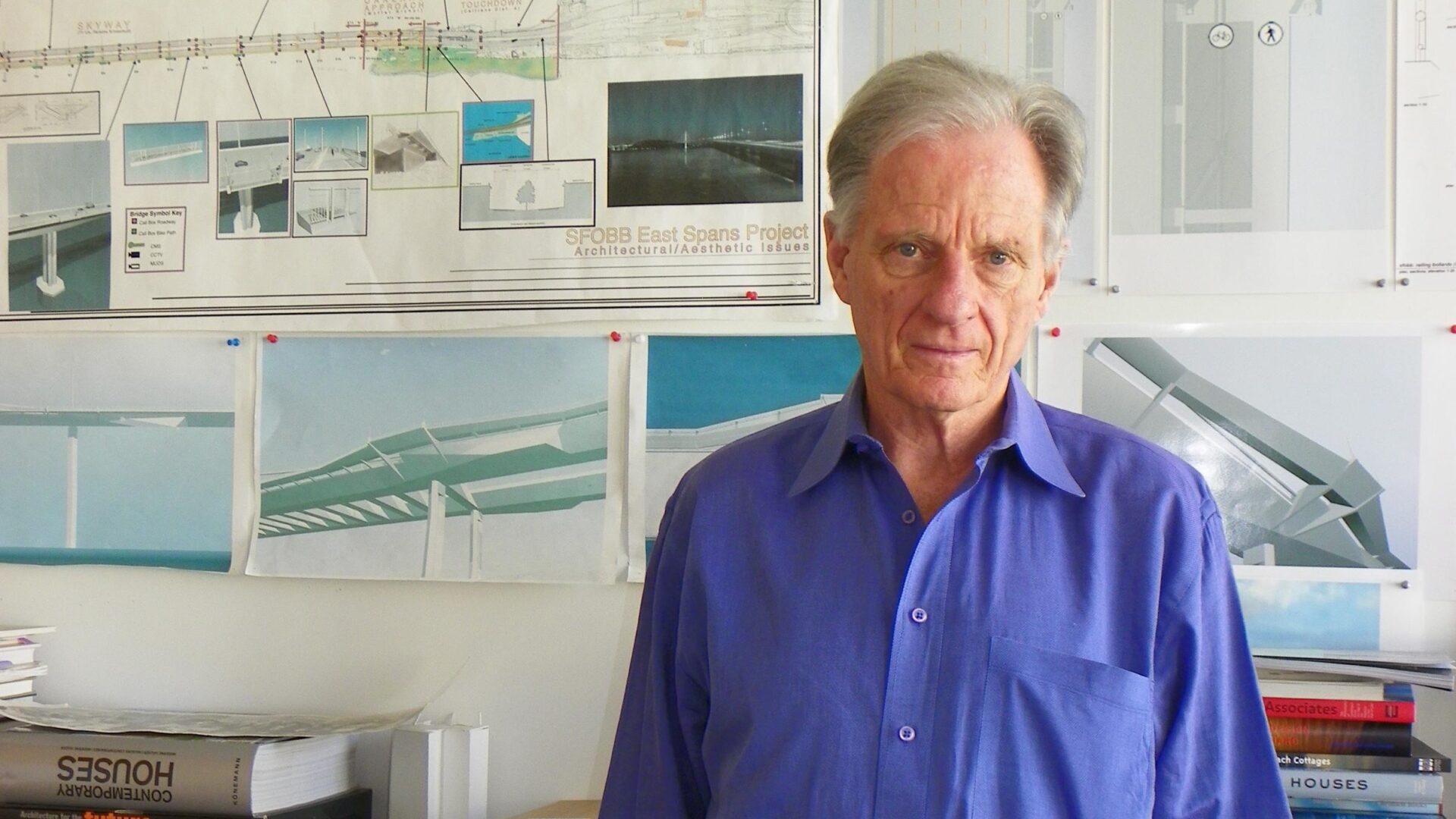 MacDonald (b.1935), who was born in Canada, chose to study architecture at the University of Oklahoma after seeing a photograph of Bruce Goff’s work. He studied with Herb Greene at Oklahoma and later earned a master’s degree from Columbia University. He has said that the level of freedom he was given in Herb Greene’s design studios at OU fundamentally shaped his vision of the creative process as central to an architect’s practice.

It was MacDonald who gave the name “The American School” to the pedagogy and practice that emerged at the University of Oklahoma in the mid-century under Goff and Greene. After finishing his master’s degree, MacDonald opened his own private practice in San Francisco.

To date, he has authored five books and been awarded over two hundred design awards. He is internationally known for his many bridge designs, including the Eastern span of the San Francisco-Oakland Bay Bridge. Beginning in 1980, MacDonald advised on design updates to San Francisco’s Golden Gate Bridge for nearly 30 years, including seismic upgrades, bike rails, and safety barriers.

MacDonald also worked with an American Indian activist group during the Occupation of Alcatraz from 1969 to 1971. During that time, he provided design support for their master planning efforts on the island. These design drawings are among those included in MacDonald’s donation to the American School Archive.

In the 1960s and ’70s, MacDonald developed master plans for ski areas in California, Utah, and Colorado. His practice has also embraced the domestic scale, including affordable housing and furniture design. In the 1970s, MacDonald pioneered the design of tiny houses for San Francisco’s homeless population with his City Sleeper design, an individual shelter constructed from prefabricated parts and plywood.

Other interesting facets of MacDonald’s career documented in his collection include notes from the time Mikhail Gorbachev, former President of the Soviet Union, invited him to participate in the World Forum on Peace and his design for a monument to the Antarctic for Greenpeace which was published in L’Architettura.

“Donald MacDonald is one of the most impactful graduates in the history of the OU architecture program. His creative and entrepreneurial spirit lives through his ideas and drawings,” said Hans E. Butzer, dean of Gibbs College. “This full collection of his drawings ranges from sketches of iconic bridges to the kit of parts he created for the homeless of our cities.”

“The American School Archives were made much more complete today as a result of this generous gift,” Butzer continued. “It will ensure future generations of students, scholars, and architects will be able to better appreciate his lasting impact and understand the power of the entrepreneurial and empathetic architect.”

About the Donald MacDonald Collection

The Donald Macdonald Collection spans seven decades, from the 1960s to present-day. It includes more than three hundred flat files filled with full-sized drawings, many hand drawn, that range from the dreamy to the technical. The collection also showcases his early work, including flamboyant and abstract drawings, as well as a paper trail of designs for the buildings and prominent bridges, which MacDonald humbly sums up as “just bridges.”

The collection also includes large-format scrapbooks arranged in chronological order in several volumes. They are filled with delicate archival paper, and lined thick with clippings and photographs that tell the story of a career rich with acclaim. Examples of project binders, construction documents and renderings of his work on commercial buildings, ski lodges, residences, competitions, and schools are also represented. Project slides, personal sketchbooks, proposal files add to the mosaic of this impressive collection.

Within the collection are also notepad doodles and full-color sketches that speak to the genius of his work. In addition to the hundreds of flat files are about 80 file cabinets’ worth of work, including clippings representing photography, speaking engagements, and every published contribution including those in books, newspapers, and leaflets.

A highlight of MacDonald’s early works were his many collaborations with furniture manufacturers and lifestyle publications. He created and published multiple iterations of do-it-yourself designs meant to appeal to a niche market. Most were considered ahead of his time, such as the “City Sleeper,” a testament to his long-standing concern for the affordable housing crisis and homelessness, long before he published a book on the subject entitled Democratic Architecture. This work is documented in the collection through sheet-protected portfolios and depicts the social impact of many of MacDonalds’ projects.

MacDonald also authored books that explore the history of each of the Bay Area icons he has worked on, including the Golden Gate Bridge, the Bay Bridge, and Alcatraz. Among the most treasured items in the collection are compilations of his original sketches that were created for each of these published books. Many of his vibrant colored-pencil and graphite works are also represented in the collection.

The American School refers to the imaginative school of design and practice that developed under the guidance of Bruce Goff, Herb Greene and others at the University of Oklahoma in the 1950s and ‘60s. Under the leadership of Bruce Goff (1904-82), Herb Greene (b. 1929), Mendel Glickman (1895-1967), and many others, OU faculty developed a curriculum that emphasized individual creativity, organic forms, and experimentation. As MacDonald described, there emerged “a truly American ethic, which is being formulated without the usual influence of the European or Asian architectural forms and methodologies common on the East and West coasts of the United States.”

About the Western History Collection

The Western History Collection holds over 2,000 collections of primary textual materials on Oklahoma and the American West. These include diaries and journals, personal and official correspondence, literary manuscripts, business records, and scrapbooks. Among the subjects covered are Native American tribes headquartered in Oklahoma, pioneer and frontier life, missionary activities in Indian Territory, cowboys and the range cattle industry, Oklahoma’s petroleum industry, and the history of railroads and transportation in the West.

About the University of Oklahoma

The University of Oklahoma (OU) is a Carnegie-R1 comprehensive public research university known for excellence in teaching, research, and community engagement, serving the educational, cultural, economic and health-care needs of the state, region, and nation from three campuses: Norman, Health Sciences Center in Oklahoma City and the Schusterman Center in Tulsa. OU enrolls over 30,000 students and has more than 2700 full-time faculty members in 21 colleges.